Could active Global Citizenship be the answer to Boris Johnson’s Brexit?

Kate and Kyrstie, two trainees in Edinburgh reflect on the December 2019 UK General Election, and how GCE could be a way forward.

Having lived through two referendums at University, first for Scottish Independence in 2014 followed by the Brexit referendum in 2016, it seemed fitting that our first week at Bridge 47 was defined by a General Election that would determine the UK’s future relationship with the European Union.

Ever since the Brexit vote it feels as though the tumultuous waters of British politics have festered into a storm with no clear land in sight. Like many young people across the UK, we have become anxious about the future. We are worried that our country is becoming insular and selfish, closing its borders and rejecting global issues. And we were hopeful with this election for a move away from austerity and right-wing leadership, and for a move towards a government that aligned with our values and aspirations for the future.

Over a sombre cup of tea on the morning of the Conservative’s landslide victory, we discussed how our shock highlighted the social media echo chamber we both lived in, and what the election would mean for us as young women, as fresh new trainees working in the Third Sector, and for Global Citizenship Education.

Wait, where’s my say in this?

In the Brexit Referendum in 2016, Scotland voted to remain by 62% (BBC News 2016). A feeling of what many people in Scotland describe as being ‘dragged’ into a Brexit they never voted for, has since then only become more and more present across Scottish society. But this is not a singularly Scottish sentiment. The youth of the UK, who also overwhelmingly voted Remain, feel incredibly let down. After all, young people are the ones who will end up living with the outcome of the big decisions the electorate make today. Surely, we should have a fairer say in what our futures will look like? This General Election paints a grave picture of the future, one in which young people will be left to deal with the consequences of a Conservative government we did not elect, who espouse dated attitudes and ideologies we do not share. 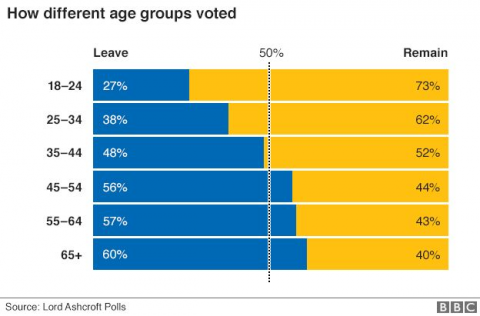 Below is a current example of how MPs have been voting in parliament. Yesterday, the government voted against continued involvement in the Erasmus scheme. This is incredibly worrying, especially for Kate who benefitted hugely from an Erasmus-funded year abroad during University. To us, this really is a tragedy for future generations, not only for young people in the UK who wish to go abroad, but also for young people across Europe who wish to study in the UK. By voting in this way, the government is closing the door on equal opportunity for all. 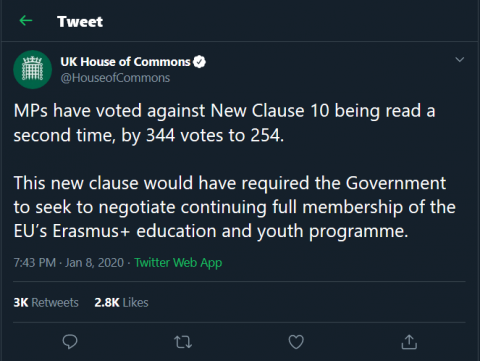 Social media as an echo chamber

In reality, none of our friends actually voted for this kind of country. The majority Conservative vote led us to question whether there is in fact a space for us in contemporary British society. How can we feel like our opinions have value when the electoral system consistently shuts them out? Social media had been awash with support for left-leaning parties who favoured remaining in the EU, and the “get the Tories out” message was incredibly strong. Even more so than after the Brexit referendum, our internet bubble felt like nothing but an echo chamber. And we felt helpless.

That being said, we are proud to be part of a generation of young people who are politically active and heavily engaged with current debates. Although Twitter may feel like a bubble, social media allows for a huge visible demonstration of active citizenship. The youth are not only engaging with issues in Scottish and UK politics, but with debates that exist across Europe and on a global scale. More than previous generations, we recognise that the decisions we make not only affect locally but can have a knock-on effect across the continent and the wider world. Although we may not know what to call it, much of our generation are active or aspiring global citizens.

GCE as a wake-up call

We, ourselves, are inclined to question how we can respond to the challenges that have risen from Brexit and this recent UK election. The rise in populism and ‘one nation conservatism’ in the UK conflicts with the values of global citizenship that Bridge 47 seeks to share and inspire. Global Citizenship Education is important to us because of its inclusive nature. It breaks down boundaries and encourages dialogue across an increasingly polarised society. It bridges the gap between formal and informal education and recognises that all of us are life-long learners. It activates citizens within their communities, both politically and socially, encourages us to challenge preconceptions and power structures, and calls on us all to strive to be better human beings in the interconnected world. This is the world we want to live in – a world which is connected rather than divided.

Perhaps we need to think more about how we can bring our social media bubble into mainstream political debate. While our bubble may feel helpless, expanding it across generational divides and opening up the debate to include other differently minded groups in society would create more of impact on the ground. Maybe it is time for the bubble to burst and to take the conversation to the streets.

Position: Events and Communications Trainee
Email: kyrstie.brown@bridge47.org
Kyrstie assists Bridge 47 with communication and events within the Advocacy Team across Europe.

Kate assists Bridge 47 with events and communications within Innovation on a national level in Scotland.